We all know that preparing for a substitute is more work than actually BEING at work, but there are times when you just can't avoid it. Then you cross your fingers and hope that today isn't the day that your normally well-behaved children decide to act like little monsters. Also you have to hope that your sub isn't one who delights in bringing out the worst in high school kids - you know what I'm talking about. Here's my process for subs.

BEFORE
In the front of each student's binder I have a few pages specifically spelling out procedures for special situations, one of which being a substitute teacher in the classroom. The first time I go over sub expectations is well before I have a sub in the classroom. Here they are: 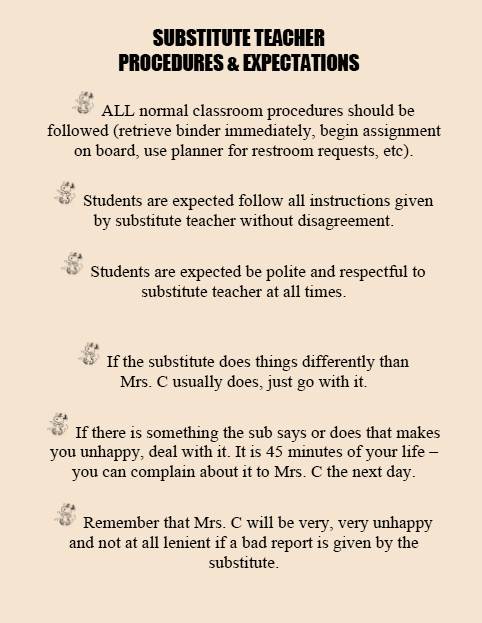 The biggest help here is point #5: if there's something the sub says or does that makes you unhappy, deal with it. It is 45 minutes of your life. Put in perspective, the kids realize that it's pretty dumb to get in trouble over such a small part of their day.

When I know I'm going to have a sub, we review these expectations as a class the day before. After a time or two the kids begin to grumble  "we know, we know," but that leaves no room for excuses.

For the sub I leave rosters, seating charts, and detailed plans - all the usual stuff. I make sure to include my class schedule including the times for each class - apparently a lot of teachers don't think to do this, because subs always thank me for giving them this info. I also leave a note for each class to be read aloud by the sub - that way the first instructions they get are directly from me. I usually end with some kind of mock threat, such as "I expect to receive a good report from the sub as usual. If not, I will feed you to the seniors. Think it over." The kids get a kick out of that.
One thing I really hate is when the sub either leaves no information about what went on during the day or very vague notes. Hence, I have created a feedback form that I ask them to fill out for each class. 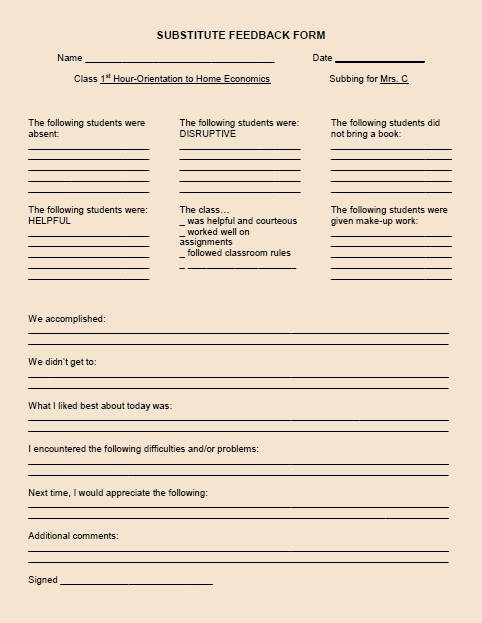 Since I began using these forms, I have received dramatically better feedback and notes on the day, the students' behavior, and other useful info. I read the comments left to the kids to show them I'm serious about checking up on them when I'm gone.

Email ThisBlogThis!Share to TwitterShare to FacebookShare to Pinterest
Labels: Organization