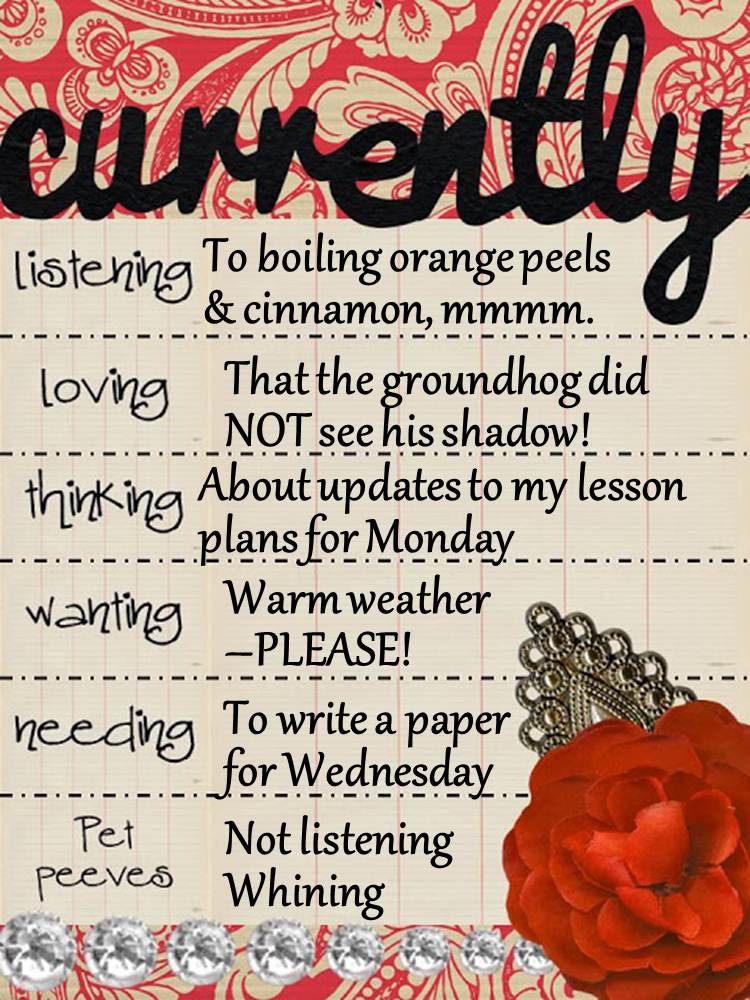 Pinterest, the root of all things wonderful and "why didn't I think of that?" inspired the orange peel/cinnamon stick boil - the house smells heavenly! Another successful pin!

Punxsutawney Phil did NOT see his shadow, which means an early spring! Woo hoo!

Always thinking about how to make lessons better; a teacher's work is never done.

It has been BITTER cold here the last few days, so I am SO ready for warmer weather.

I have a paper due on Wednesday that I need to at least complete the first draft for by tomorrow night, so that I'll have time to revise and pretty it up before handing it in. Not a difficult assignment, just have to sit down and do it.

Ah, pet peeves. Not listening has to top the list. I have (nearly, on most days...) infinite patience for re-explaining things to kids who don't quite "get it" or have difficulty understanding. But for the kids who blatantly ignore directions, talk while I'm talking, chat while I'm displaying examples, write notes while we do a sample exercise together, refuse to read the written directions that mirror all of the above, and then expect me to stand there and give them a private tutorial when they full out admit that they paid no heed to anything that has gone on in class up until that point... that makes my head want to explode. In fact, I think that my brain breaks a little each time it happens. Which explains my headaches and inability to locate my keys on occasion.

And whining. How I loathe the whining. If only we were allowed to use duct tape to eliminate that problem... : ).