Another month, another "Currently" from Farley! 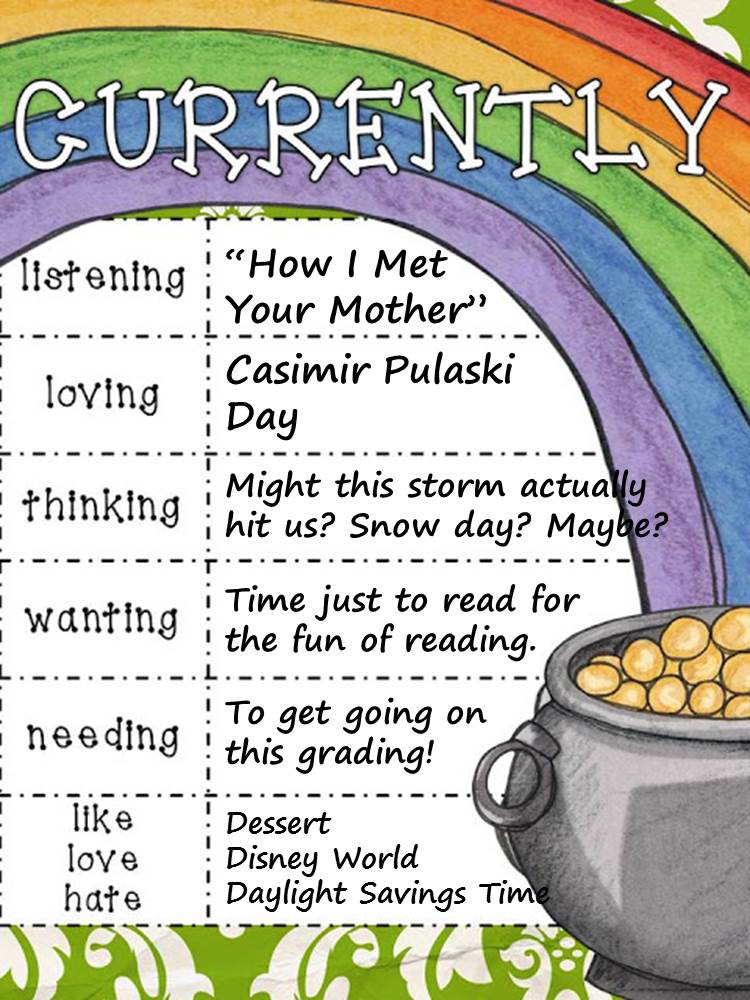 "How I Met Your Mother" - at the prompting of a co-worker back in May, I picked up this show on Netflix - I figured it was going into its last season, might as well. When they announced they would be running another season after this one, I was crushed. I want to know who the mother is and move on with my life already! But I've come this far... argghhh... (On a somewhat related note, hubby and I just finished the first season of "House of Cards" - AMAZING! Love this show, can't wait for the second season!)Casimir Pulaski Day, a school holiday in my neck of the woods. Hooray for three day weekends! I promise you, I would work longer days four days a week to get a three-day weekend every week. Think about it: despite your best intentions, Saturday is usually a recovery day, Sunday is for grading/lesson planning/laundry/house cleaning/church/all sorts of miscellaneous chores, then boom! Back to work. With a third day you can actually get stuff done! Or, not get completely buried by a weekend getaway... : )Another storm threat - these always disappear before hitting us. And not that I want to extend the school year, but I wouldn't snub my nose at a snow day. It's been two years since the last one, after all! Ideally, we would report for school tomorrow, run ISATs in the morning, then get sent home early... still get credit for the day, no nightmare ISAT make-ups, AND a little free time!Grading. I don't mind the first-run stuff so much - it's all the darn make-up work!Like/Love/Hate - I did break the rules a bit here. They were all supposed to be one word, but I couldn't (wouldn't?) do it. Dessert, mmmm. Had my first dessert this weekend since Thanksgiving weekend. I've been very good about cutting the excess sugar, but when you're at a lovely Italian restaurant, how do you turn down tiramisu? Disney World! Best vacation ever - I still think about it daily since we returned seven months ago. Daylight Savings Time in the spring means that it goes back to being pitch black when I leave the house in the morning. So much harder to get moving without natural light!