As I mentioned the other day, this week I started my 6th curriculum rotation of the school year. It's been interesting teaching each subject only for about five weeks (minus half days, Monday holidays, institute days, etc); I've had to really think about what is essential to include and how to most efficiently meet my course objectives in that small amount of time. I've also learned many of the quirks of junior high students in general and of students at my school in particular. I'm going to share how I organize my sewing unit as I go along, in case you're looking for any ideas. I always am, so feel free to share what you do as well! Note: if you are not a FACS teacher, this is not going to be all that interesting. Perhaps even if you are a FACS teacher, it won't be all that interesting : )

We always start out with the rules. Some are worded a little harshly, but I've learned that blunt is usually the best for understanding. Here they are (they receive these in the form of skeleton notes, and we fill in the blanks during a PowerPoint presentation): 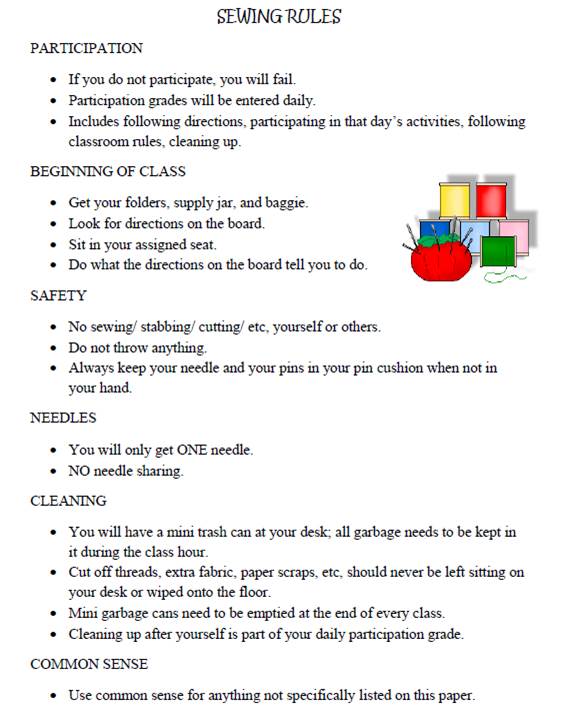 One thing that I have learned at every school I have worked at is that classes can be very unreliable and/or unpredictable about providing their own sewing supplies. Aside from the "forgetting" and unlimited lists of excuses, sometimes kids bring in things that either aren't quite right, aren't in good repair, or are just plain weird. I've found it so much easier to simply provide the basics, that way I know for sure that all students will have the right supplies on the correct day that I plan to begin sewing. Also, everybody has the exact same supplies which seems to limit petty bickering and jealousy.

Since my sewing unit is so short this year, the only supplies I require my students to provide on their own is the fabric for their one sewing machine project, a pillowcase - all they have to bring in is 3/4 yard of one fabric and 1/3 yard of a coordinating fabric. Even with this, I give them the option to pay me (one week in advance) for fabric, and I will make sure I have some on hand for them when we begin (limited choices of designs, of course). Here is the supply/info sheet I hand out: 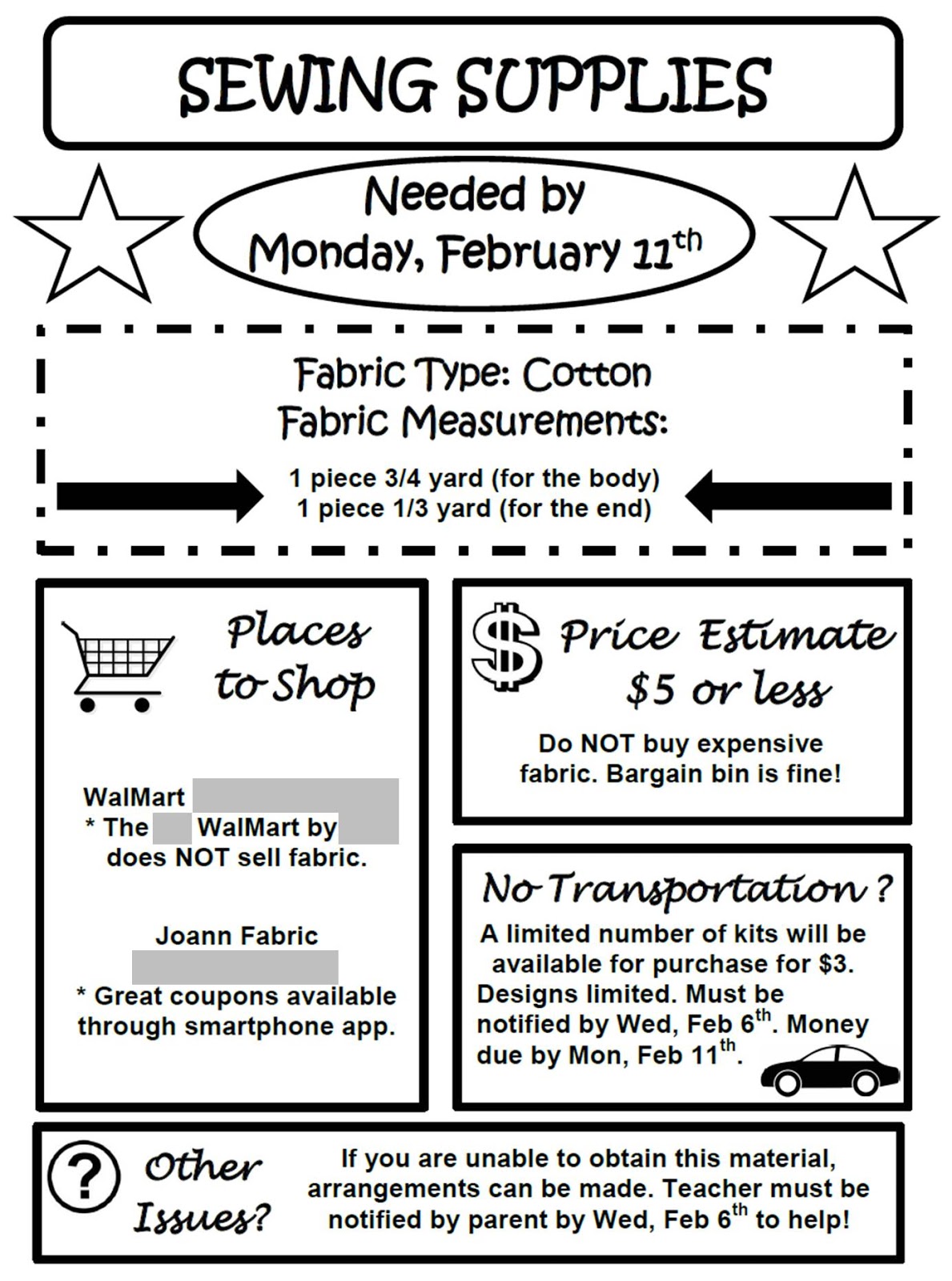 So all that being said, when we begin the sewing unit, I give each student a starter bag. Here is what I include: 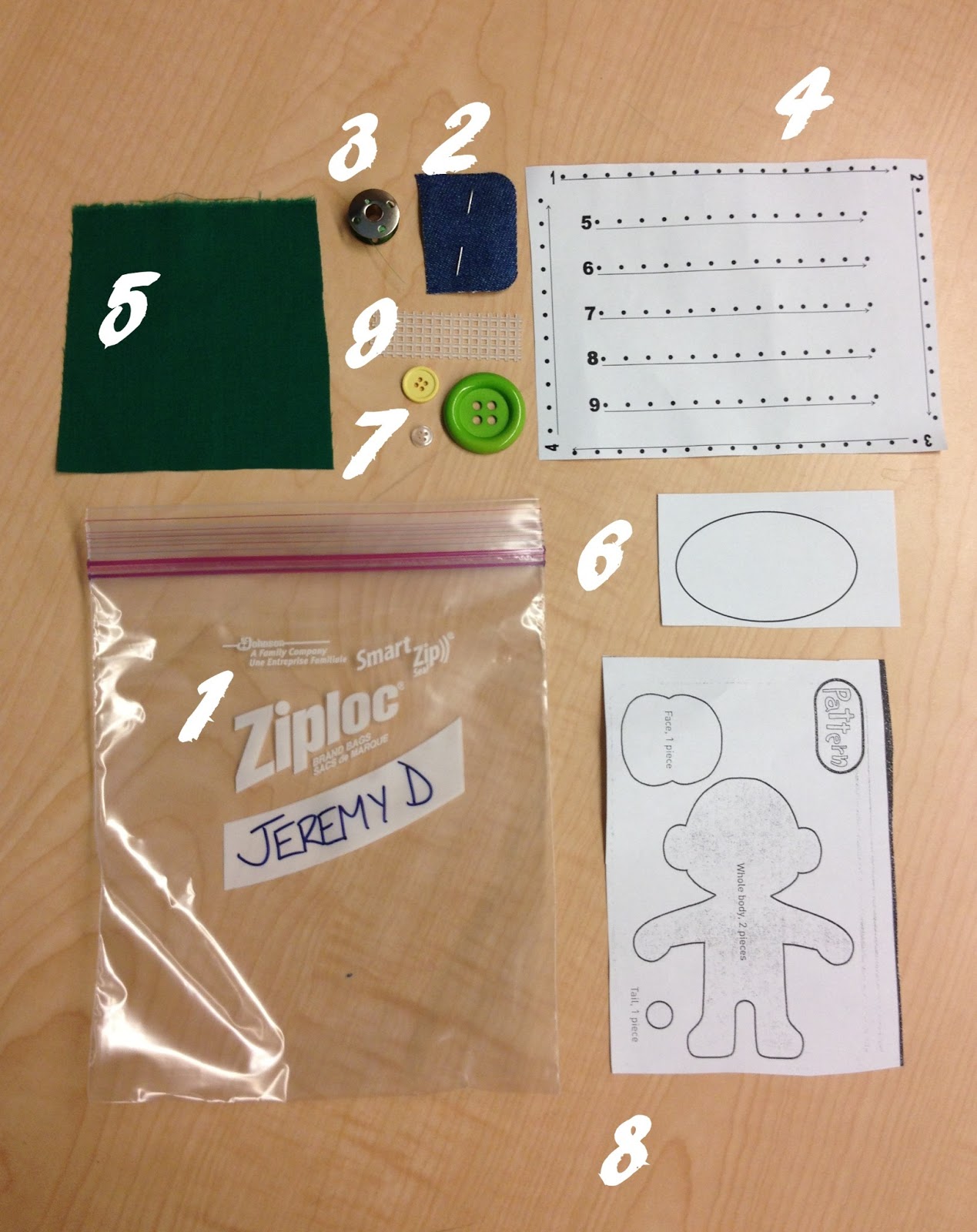 1: Quart-sized baggie. Can be a little tight at times, but I found that gallon-sized baggies took up way too much room. I write each student's name on their baggie with a Sharpie. During one rotation I tried sticking a label on the outside (I love printed labels!) but the kids tended to write/doodle/scratch out letters on those labels which made them difficult to read over time; also, when baggies fell into "enemy" hands people tended to write unpleasant things on that person's name label, which is easily marked with a standard pen or pencil. During another rotation I tried attaching a label on the inside of the bag, but that made it tricky to see when the bag was full. So a Sharpie it is!

2: Iron-on patch and needle. I cut iron-on patches into roughly 2" x 3" rectangles, then teach students to "Tuck, tuck, needle stuck" every time we clean up. Lost needles are a HUGE pet peeve of mine. When I first started teaching I would replace them, but they of course wound up all over the floor. Then I started to charge for additional needles. That backfired, because when kids dropped them they were too lazy to look for them and would just pay for a new needle. Again, needle-covered floor. No more. I have a very firm ONE NEEDLE policy. If it becomes lost, they must bring in one on their own, no exceptions. There's always one kid who will try to call my "bluff" - ha, doesn't work, Buster! Anyway, they tuck-tuck the needles into their needle patch before putting their needles away in their baggies. This way they are easy to locate in the baggie, won't get lost in the shuffle while looking for other supplies, and won't poke through and fall out. I begin clean-up time each day by saying "Everybody needs to tuck-tuck!" Usually several of the kids will then yell out "Needle stuck!" - it's kinda fun. I started out by using small rectangles of canvas, but the patches are quicker to prepare and the slightly gummy coating helps keep the needle in place. BIG sanity saver!

3: Bobbin of thread. Full spools take up a lot of room in a baggie, so I don't want to give one out to everybody. Also, at my current school they get stolen quite often if I put several out to share, which I learned the hard way. My students also don't share very well, so it's best if they each have their own source of thread. Each student gets a bobbin; if they lose it, they pay a quarter for a replacement. When it runs out of thread I trade them a new one for their empty one.

4: Dot paper! I use this paper to teach basic stitches before we use them on fabric or any kind of project. It makes it very easy for them to clearly see what they are doing as well as what the stitch is supposed to look like. Some of them groan about it when learning the first stitch, but after moving to fabric they understand the point of it and are much more cooperative when we go back to the paper to learn the next stitch.

5. Piece of scrap fabric. I use this fabric for pinning and cutting practice before we get to a real project.

6. Oval printed on paper. Students cut this out, pin to the FOLDED piece of scrap fabric, and cut out two identical pieces. Most students usually complain about how dumb this is before actually doing it. Then most students usually complain about how hard it is to cut around a shape. Some of them will acknowledge that practicing first was a good idea.

Side note: Have any of you noticed a sudden and sharp decline in fine motor skills, particularly cutting skills? Since starting out seven years ago I've noticed that scissors skills have absolutely plummeted. Just the way some of these kids hold scissors makes part of my brain throb. How do they not know that's not right??!!

7. Three buttons: large, medium, small. We start by sewing the large button onto the green ovals they have cut out, then move our way down through the medium and then the small. We aim for pretty on the front and on the back! By the third one most of them actually nail it down pretty well.

8. Monkey pattern! This is our first hand-sewing project, a carryover from the high school classes I taught. For whatever reason most kids get really excited about these monkeys, even the boys. Go figure. I let them choose their own colors from a classroom collection of felt, so I don't include the material in their baggie initially. They do keep the felt in their baggies as they work on the project, and it fits perfectly fine with everything else.

9. Small rectangle of plastic canvas. Our second hand-sewn project is yarn on plastic canvas. We begin by practicing on a small piece to work out the pitfalls of tangles and the details of knots, etc. They obviously use a different needle, but I have learned not to give that one out until they are ready for yarn - otherwise if they lose their regular needle they try to use the bigger one on their monkey project, which of course just destroys the felt.

Desk trashcan - a jazzed up baby formula can to be used as a trash can during class, and as a scissors/pin cushion holder in between classes. For these I do stick printed name labels on the inside. They're easy to remove and replace for the next class, and kids are much more likely to empty their trash cans and keep their supplies neat if they know they'll be stuck with the same can the next day. 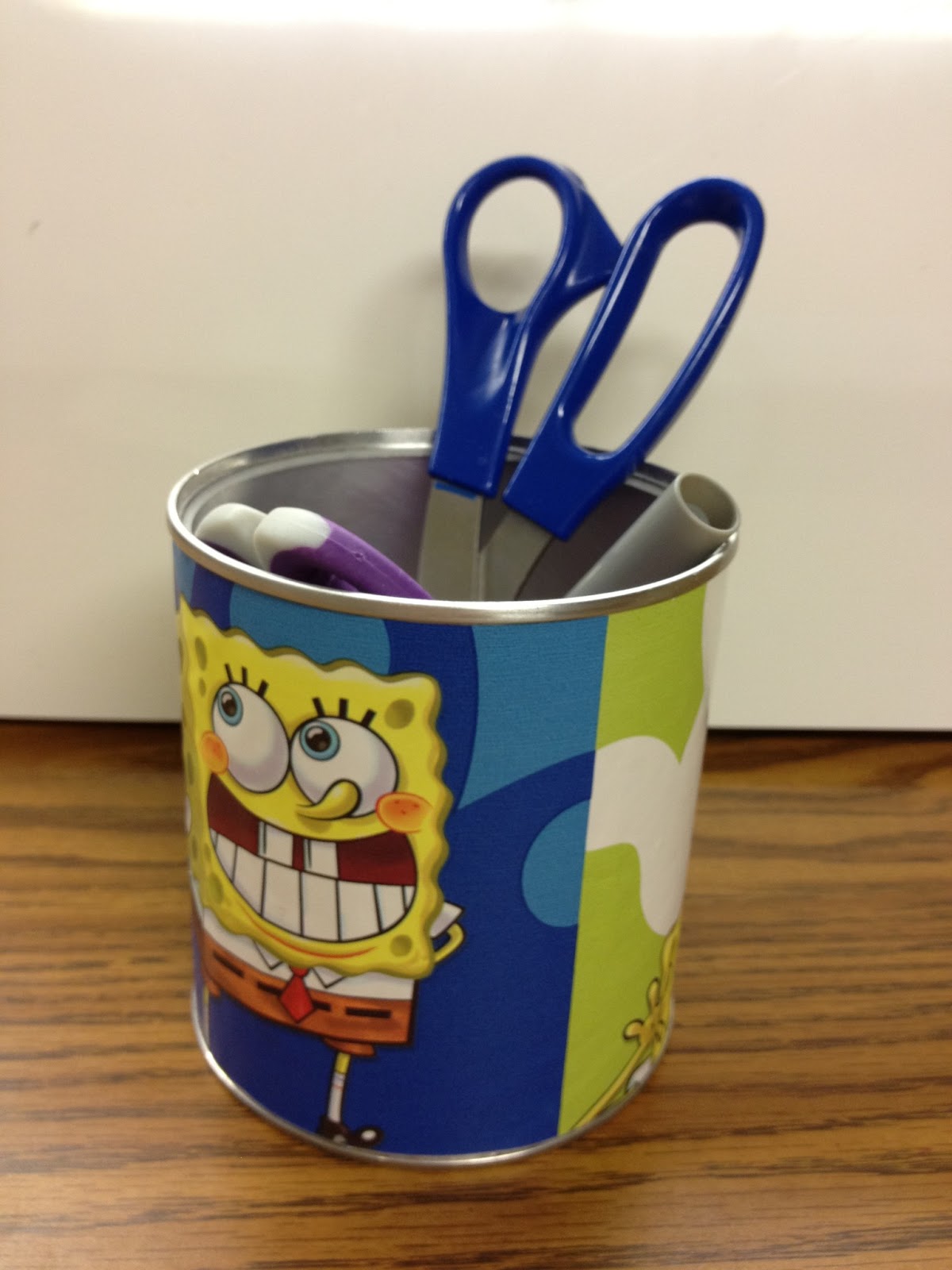 There you have it - all of my intro to sewing preparation. If only I had come up with all of this half a dozen years ago rather than piecing it together bit by bit...