So I've been putting a lot of time into deep-cleaning my new kitchens (again), and I thought I'd share a few insights. Yesterday I posted about stand mixers, today it's glass bakeware and cookie sheets.

Since I've now been through the whole setting-up-the-kitchens things several times, I've come across some pretty nasty-baked-on-grease-and-other-unrecognizable-substances cookware. Apologies for forgetting to take before and after photos, but here's a good example I found online: 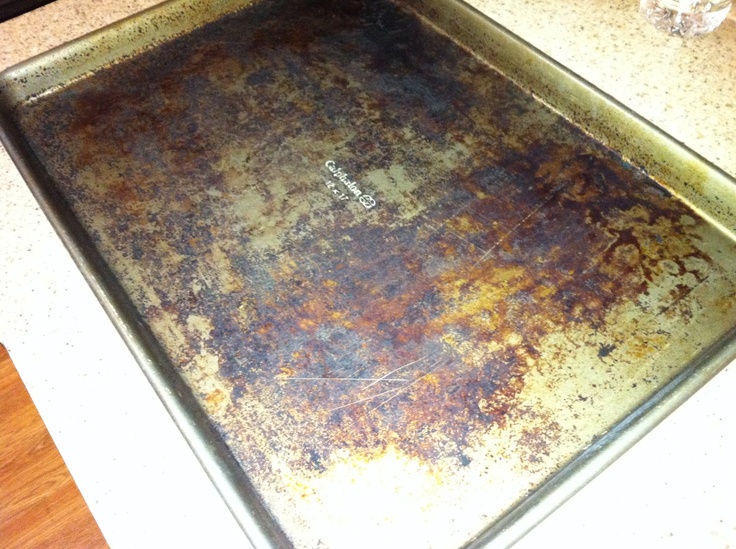 Mmmmm, appetizing! Luckily advice abounds on the Internet (Pinterest especially) on how to deal with these things. Since I've now had much experience in such matters, I'll share the method that I've found to work the best.

1. Don a pair of heavy-duty gloves. Possibly a face mask as well, if they're really gross.

3. Find a good-sized, sturdy box. The best ones are cookware boxes, because they're obviously designed to hold some heft.

4. Place ALL items into the box. Fold the top tightly closed - here's a demo video if you're not sure how.

5. Create a large, clearly written sign marked "TRASH," tape it well to the box, and set the box outside your classroom door.

I have wasted an insane amount of time cleaning up items that are relatively cheap to replace when my time would have been much better spent on other tasks that needed to be completed in preparation for a new school. Either sacrifice part of your budget or pay out of pocket, it is WORTH IT. Plus, you'll have shiny new stuff which the kids will take better care of anyway.

Actually, let me change one thing: leave the box top open. Chances are that someone will take a lot of the stuff out of the box - even once it hits the dumpster. Trust me. I just wanted to include the video, I thought it was hilarious.