Sometimes keeping track of keys is a real pain. I wish I had taken a picture of the keys I had last year. Not kidding, they must have given me about 23 different keys. By the end of the year I knew what about six of them were for.

Anyway, you need to have them close at hand, but you don't want them in the way or weighing you down, nor do you want a kid walking off with them (luckily this year I have little worries of the latter). So, I'm trying something new with my classroom keys this year: 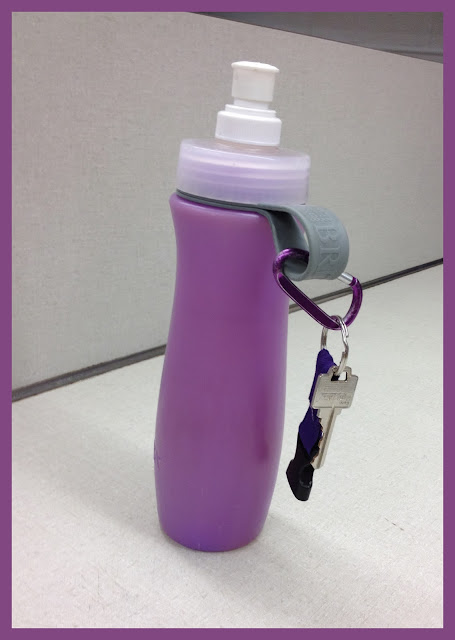 At last year's school I was required to wear a lanyard around my neck with my ID, so the two keys I used regularly were on there - hated it. Always got in the way during cooking and sewing, of course. The six years before I always kept them on a lanyard that I kept in my pocket, but that only worked when I wore something with pockets - otherwise I just had the lanyard out somewhere, and it could be difficult to locate if I set it down in an odd place. Plus it was kind of bulky and annoying. And, honestly, with the lanyard dangling down it got caught on things fairly regularly, which was kind of embarrassing.

So this year I split the keys up into a few different places. The only key I need to have handy on a regular basis throughout the day is the master room key, so I decided to try it out on my water bottle. By the way, these Brita bottles are fantastic! Our school water is pretty disgusting, but you can't tell at all when drinking out of these babies. After fourteen weeks I can say for sure that I LOVE using this as my "key ring" - it's super easy to locate from anywhere in the room, and has the added bonus of reminding me to stay hydrated since I always have it in hand when on hall duty or traveling elsewhere in the building. Also, since my classroom door is never locked due to the fire escape, I just keep it hidden in a classroom cabinet at night so I never forget this key at home.

My "occasional" keys - cabinets/sliding doors/etc I keep in a safe place in the classroom, since I don't need them readily on hand at all times. My key to the outside door I keep on my car key ring, so again it's never forgotten at home and I never accidentally lock myself out when running out to my car for something.

So there you have an entire post on keys. And you read the whole thing. Haha! Time you'll never get back!

Posted by Denise at 8:00 AM No comments:

Email ThisBlogThis!Share to TwitterShare to FacebookShare to Pinterest
Labels: Organization

A year and a half ago or so I posted about a job wheel I created to assign miscellaneous tasks that need to be completed after each cooking lab. This year I've switched to displaying it on the projector during labs; it's easy to rotate the wheel in PowerPoint, and the different images accommodate classes with different numbers of cooking groups. 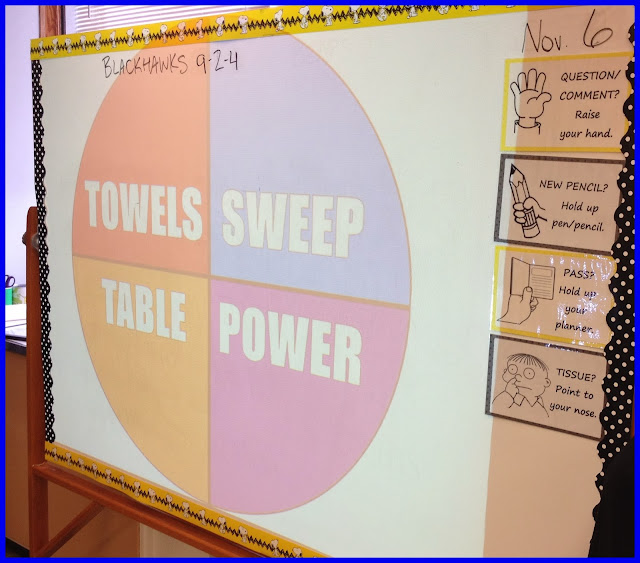 The morning Foods class only has four groups, so they are responsible for:

TABLE - clean off the ingredient table (close lids/boxes/containers, wipe off table)
FLOORS - sweep ALL of the kitchens and common area in between
TOWELS - make sure all towels are in the washing machine
POWER - check all kitchens to make sure all appliances are turned off 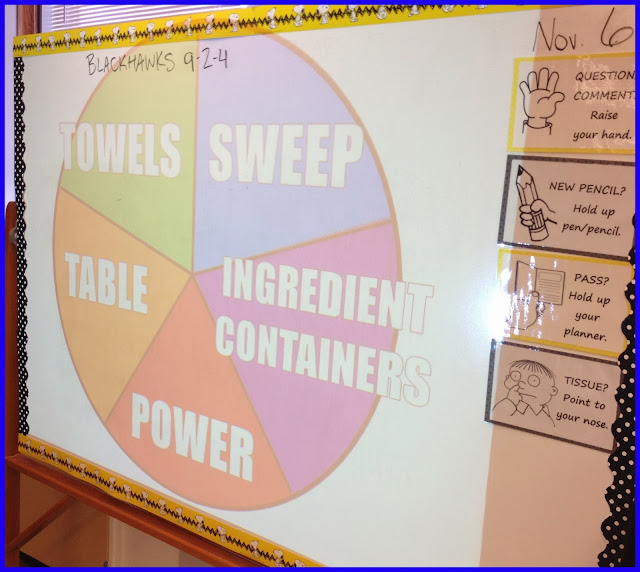 The afternoon Foods class has five groups, so one kitchen from that class is responsible for washing the ingredient containers. Meaning, if there was an ingredient I had poured out into a bowl or set out on a plate, I would take that item from the assigned kitchen and they would be in charge of washing and putting it away.

Below you can see a green bowl set out under the salt (the idea being that they lean over that bowl when measuring, rather than their mixing bowls or the table); on this day the "green" kitchen was assigned to Ingredient Containers, so it was their extra job to wash and put that bowl away. 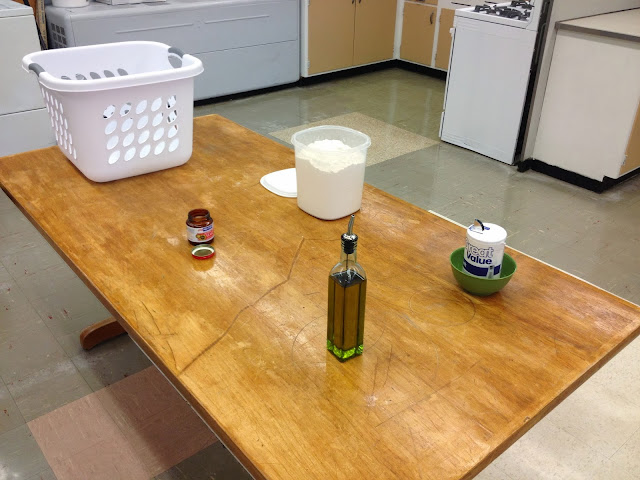 I have to say, I'm impressed with how well this works. They always remember to check the board for their "extra" job, and I don't have to nag them to sweep or whatever. I'll also add that they're much more careful about brushing stuff onto the floor, knowing that someone else will have to sweep it - or that the other group may get revenge on them later on when it's their turn to do the sweeping :).

Posted by Denise at 7:30 PM No comments:

Over the summer I posted about trying out pie bags, and today was my first opportunity to see them in action in the classroom. Epic success! They made rolling out the dough SOOOO much easier for the kids, and almost entirely eliminated the insane flour mess that usually accompanies such labs. Check 'em out! 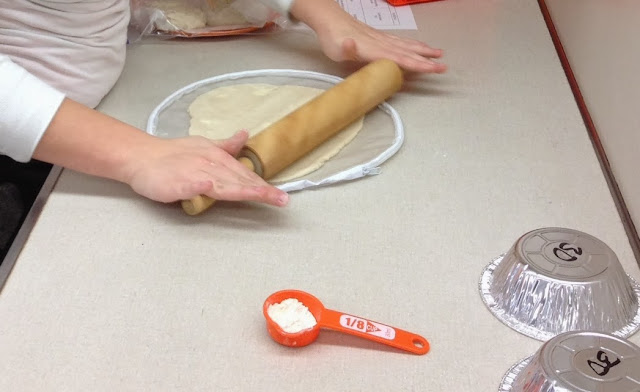 Check out the clean countertops! 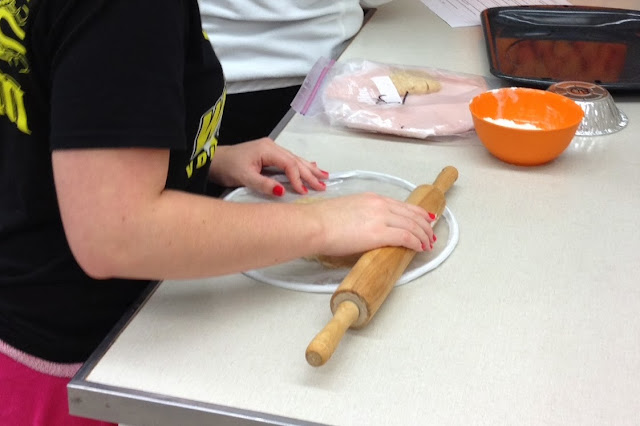 The bag easily peels off after rolling. 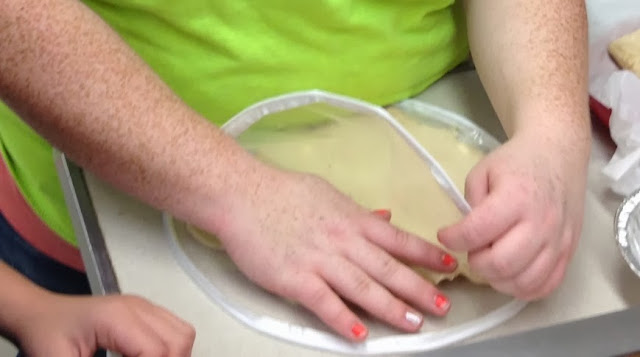 See how little sticks to the bag, even with minimal flour usage. 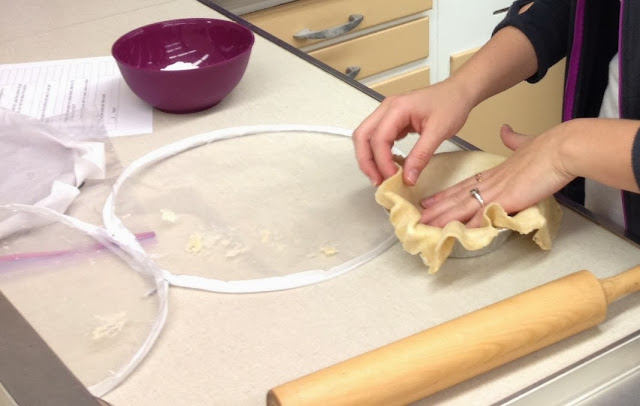 There's still always one group that completely overdoes the flour, but look how contained it is!
(I concede it drives me crazy that they chose to line their cookie sheet AFTER getting a bunch of flour on it, but oh well...) 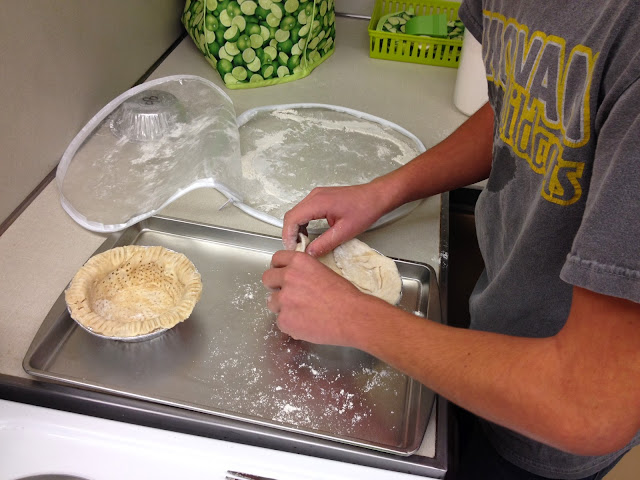 This simple, wonderful invention took an enormous amount of stress out of this lab, both for me and for my students. Highly, highly recommended!

Available at Amazon.com and miscellaneous kitchen stores (like Kitchen Collection at the mall), in two different sizes. Let me know what you think if you try one!

Posted by Denise at 8:33 PM No comments:

Okay, I get that this is becoming borderline psychotic, but here's my latest classroom kitchen upgrade: 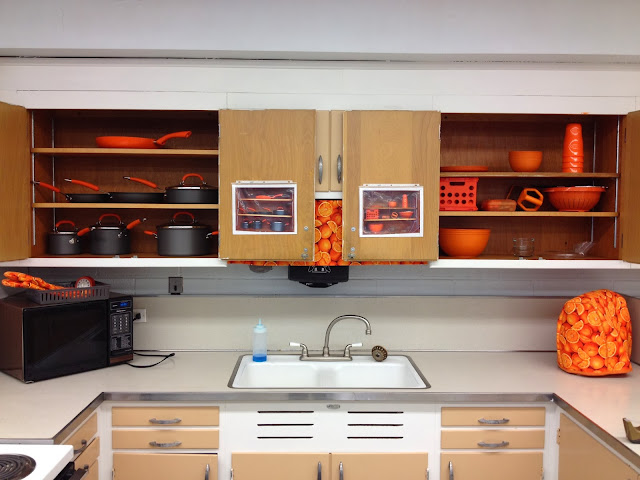 And now for the close-ups: 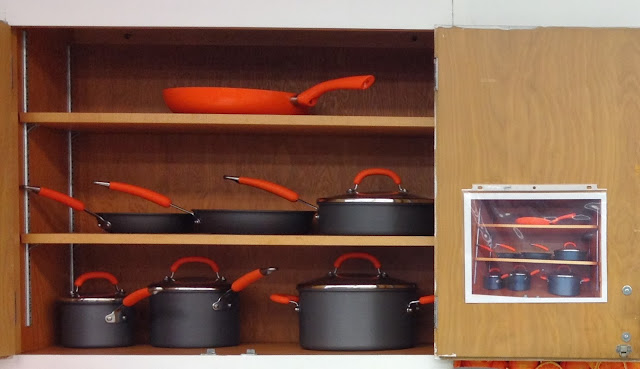 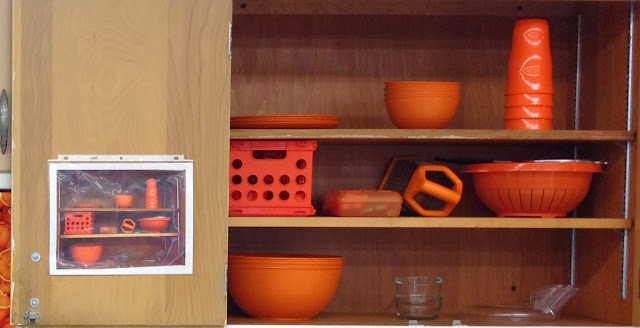 Lest there be any confusion whatsoever as to where I want these items to be stored after they are washed, rinsed, and thoroughly dried, there is now a visual guide in each of the upper cabinets. Drawers are next. Watch out, world.

November! I am not kidding, October FLEW! Awesome! Now it's already time for a new Currently with Farley! 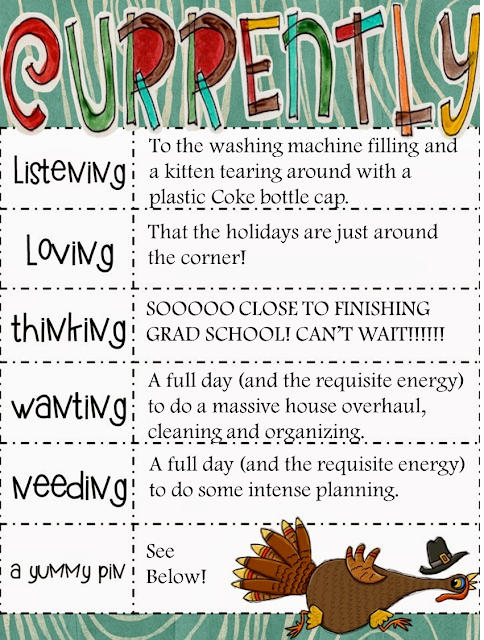 Loving - How I love the holidays! I was in Starbucks on November 1st and saw that they had the holidays cups and the holiday lattes out, hooray! While I am usually a "Christmas doesn't begin until the day after Thanksgiving!" kind of gal, I'm feeling a bit lax about it this year. One, Turkey Day is the absolute latest it possibly can be, so that shortens up the strict definition of the season. Two, I am so ready to embrace the holiday spirit! And three, I feel that Thanksgiving, an AWESOME holiday in its own right, often gets short shrift, so I'm ready to revel in festive thankfulness.

By the way, for those of you who Facebook, check out 30 Days of Thankful - participating definitely puts you in the right frame of mind!

Thinking - I am sooooo close to finishing up this second master's, and I am sooooo ready to be done!

Wanting - I'd love a day (and the energy, of course) to dedicate exclusively to my home. Just a chance to take care of all of those things you need a good chunk of time to take care of. I'm also the kind that was trained by my mother that the house needs to be sparkling clean before Christmas decorations go up, and I want that tree up Thanksgiving weekend! (as much as I'm embracing an earlier "holiday" season, for every day you have a tree up before Thanksgiving, Santa drowns a baby reindeer)

Needing - While I'd like time for extra household matters, I need time to get some serious planning done! I need to set the rest of the semester in stone, so that I can write those exams that are due to the office the first week of December!

A Yummy Pin - Haven't made this yet, but O.M.G.! Ice cream sandwich cake? Brilliant! 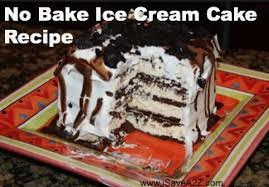