The first day of a new month - that means Currently with Farley! 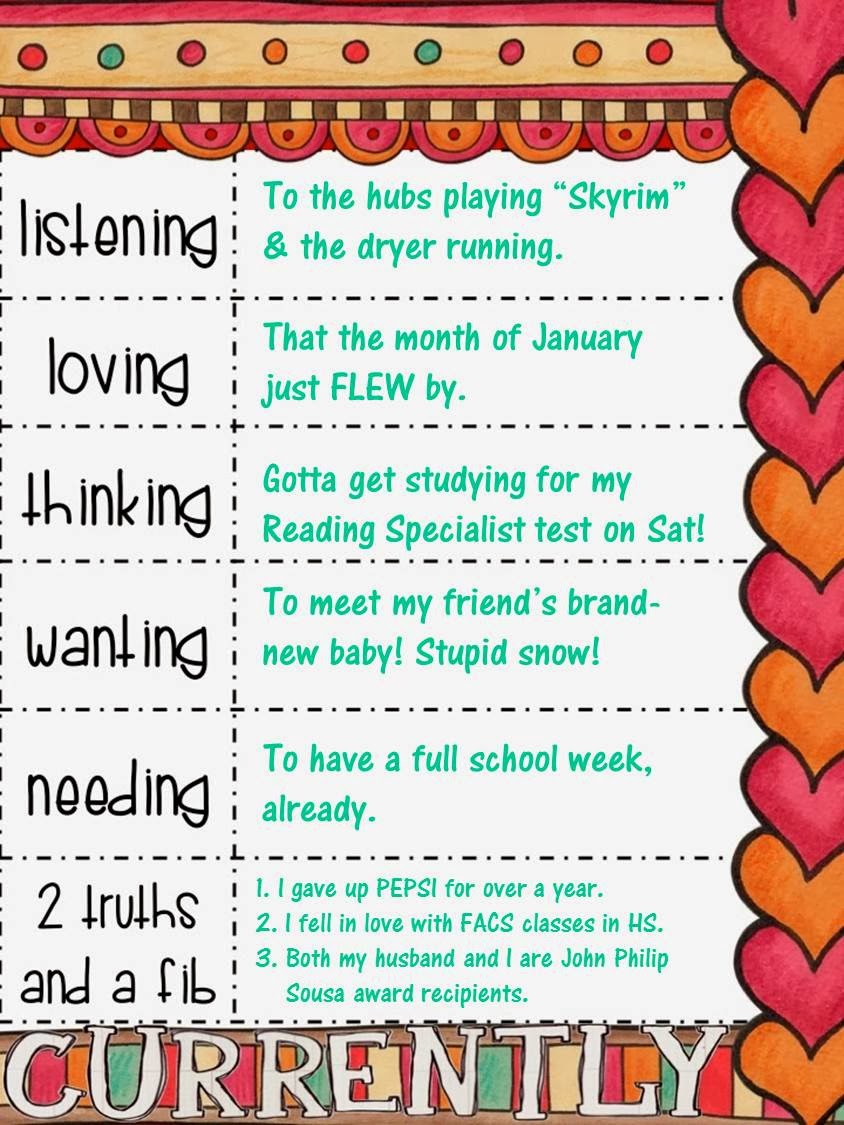 Listening - How well I know the "Skyrim" soundtrack : ).

Loving - Wow, January went FAST! That means we're inching toward spring, which means a reprieve from this epic winter; come on, Punxsutawney Phil!

Thinking - My content test for the Reading Specialist certification (and degree) is this coming Saturday, and is the last thing I need to do to officially complete that master's. Woot woot!

Wanting - One of my best friends just had her first baby on January 16th, and he is of course absolutely adorable! So far I've only seen the pictures though, because she's a little over an hour away and the weather will just not let up for travel!

Needing - We have yet to reclaim any sense of normalcy since returning from Christmas Break. The first week back was a three-day due to weather; the second was Homecoming; the third was a four-day due to MLK, Jr Day; last week we had two "polar day" cancellations; this week doesn't look promising; AAARRRRGHHH! The kids have been nuts, and who can blame them?

Truths/Lie - I did give up Pepsi for about 13 1/2 months. I do love Pepsi! I have no interest in any other soft drink, though in a pinch I may occasionally have a root beer. I'm happy to report that since returning to my Pepsi ways I've not been overindulging.

As for the FACS classes, I only took one FACS class in high school, it was only one semester, and it was "eh." Weird for a FACS teacher, huh? It wasn't until college that I discovered that passion!

And yes, there are TWO John Philip Sousa awards on our home piano - one is mine, one is my husband's. Back when we taught at the same high school we would go to the graduation party of that school's JPS winner from that year so that we could have a photo taken of all three of us holding our JPS awards.

Here's to a new month! Let's make it a great one!

Email ThisBlogThis!Share to TwitterShare to FacebookShare to Pinterest
Labels: Currently